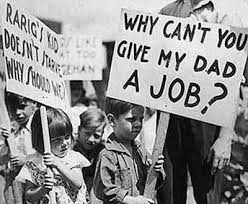 Buy Essay The Great Depression of the 1930s

The United States of America is largely known as the world superpower as manifested by its vibrant economy, top niche military equipment and the best part of it all, the ability of Americans to deal with whichever crisis that gets tossed their way. One such crisis was the 1929 Great Depression that shook this nation to the core, a weaponless World War 3. As stated in Encyclopedia Britannica, the Great Depression of the 1930s, which occurred just before World War 2, was a downhill economic phenomenon that affected everyone in the continents across the globe. In The United States of America, this was marked by the slump in the New York Stock Exchange (the Wall Street stock market) on Tuesday, October 29, 1929.

The events of this “Black Tuesday” set off a decade of massive unemployment, loss of homes and a drop in international trade, tax revenue and prices of goods. This depression was blamed on the unequal distribution of wealth and resources, reduced levels of purchases, stagnation in the growth of new industries, a slump in the stock market trading and bank failures due to lending out money to customers who were unable to pay it back (Frank& Bernanke, p.98).

These are just model papers; Please place an order to Buy Essay The Great Depression of the 1930s.